***ONLY DO WHAT YOU ARE COMFORTABLE WITH***
This is a spin on the BUBBLE BOY Post.  My girls love all things glow in the dark.  They have been asking to do GLOW AND SEEK  for a while now.  They can never make it up until dark… so I thought I would bring the dark to them.  AK and her son came over for the fun as well.  :-)
Materials used:
Black Tarp.
(I used THIS, and folded it in half)
Duct Tape.
Fan
(I used THIS… but next time will use something with more power… it didn’t inflate as much as I wanted it to)
Black light (optional)
After you have the tarp folded in half, stretch out a piece of duct tape the length of the tarp.  Place the duct tape on the ground and then put the tarp down over top… leaving enough room to fold the tape over and seal it.  AK and I did this together which made it much easier.  Next, seal the opposite side.  This leaves it open on one end.  It will look like a giant garbage bag.  Lastly, take a piece of duct tape and seal just the middle of the open end… leaving two holes.  One hole to walk in, and one hole for the fan.  After you have the fan in the hole, duct tape the tarp to the back of it to seal it.  Try not to cover the fan completely to allow for air movement.
I know this may sound complicated but it’s really simple and a lot of fun! 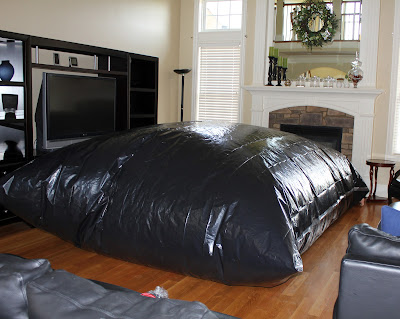 Our bubble in my living room. 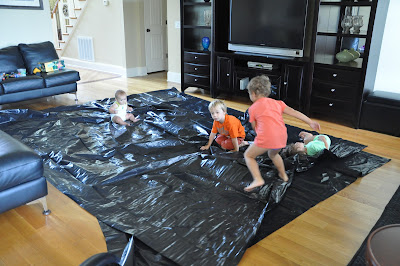 Yes, they all had a lot of fun just playing on the tarp itself! 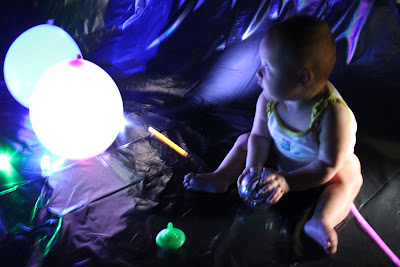 My 7 Month old inside the bubble. 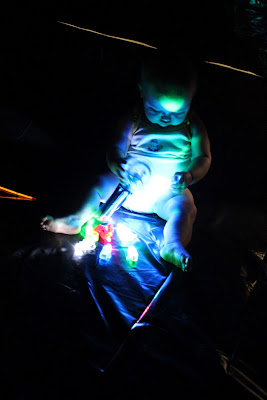 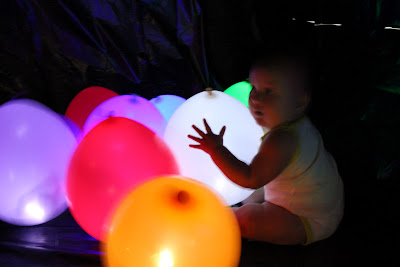 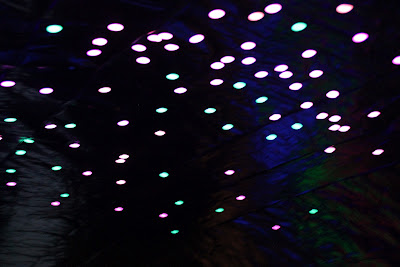 “Moons and stars”
AKA
Color coding labels under a black light. 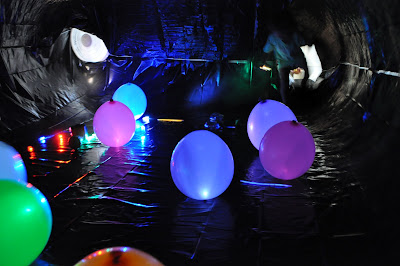 Inside the bubble.
This was AWESOME!! 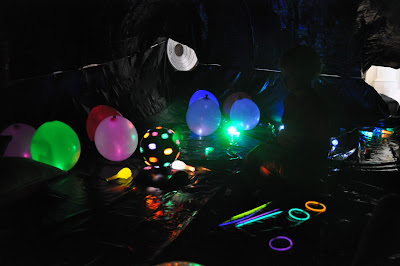 Inside the bubble.
We used:
Glow sticks
Disco Ball
Lumiloons (Party section of Walmart)
Finger lights
Light up spinning tops
Color coding labels
If you have a black light you could also paint with neon paint.  If this was outside I totally would have done that.  I just didn’t want paint all over my living room!
RL

28 Responses to Bubble Girl (A walk in bubble adventure)