There is really not much to this post, at least not in the sense of setting up and adding this and that.  We get a lot of posts on our FB page asking for simple ideas.  Well, this is just a little reminder that FUN can be as simple as sand.  My son has really been loving his sand box lately.  Have you ever seen these??  Its blows my mind that anyone would pay $$ for something so easy to create yourself (and with things you probably already have on hand).  With temps in the upper 90s, I thought I would bring his sandbox fun inside.  He played with this for over an hour.  I left it out and it was revisited several times during the day – and its still sitting out (per his request), in anticipation of tomorrow. 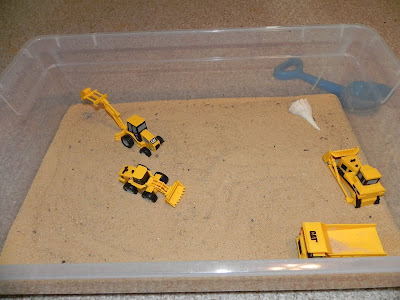 THE INVITATION
(based on the interest of the child) 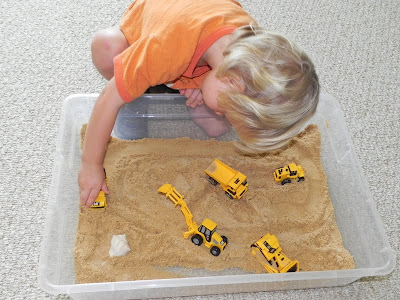 ”I need to make a track” 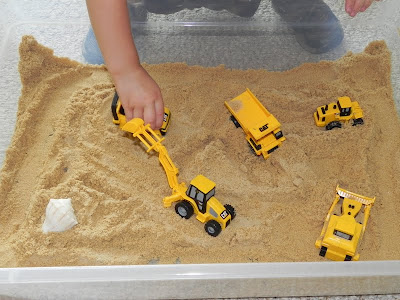 ”They are working, Mommy.  I think they might be repaving a parking lot.  Hmmmmmm….where is the concrete mixer?”  (This made me chuckle because the parking lot of a nearby school is being repaved.) 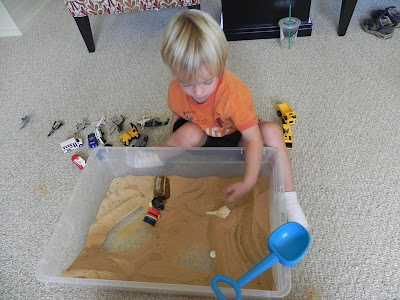 His play progressed.  He went and got his airplanes, cars, pirates, and treasure chest.  He kept drawing lines in the sand with his finger and telling me it was a map to the treasure.

6 Responses to As Simple As Sand